Standing on the main stage at the Great American Truck Show (GATS), the largest trucking show of the year, Veriha’s Apprenticeship Student Wade Bumgarner anxiously waited to find out if he made Top 3 for the Transition Trucking: Driving for Excellence Award. 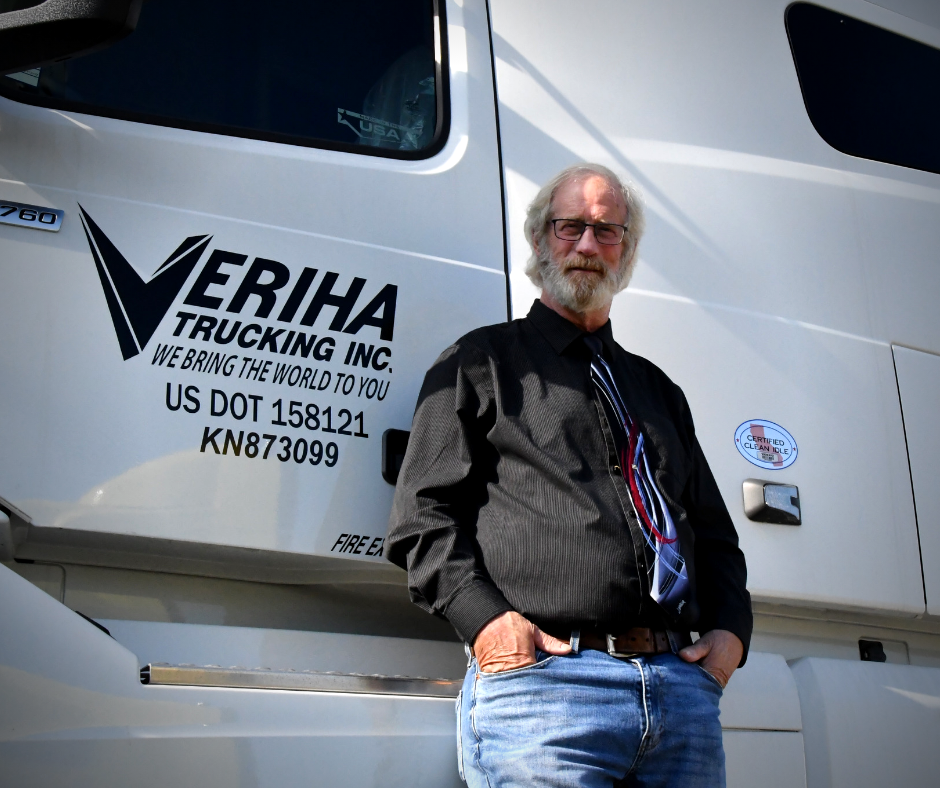 Bumgarner already had the esteemed honor of making the Top 10 of this award that was created to honor veterans who transitioned into trucking.  Submissions came from all across the nation and looked at the candidate as a whole from their service record, safety record, and letters of recommendation. Bumgarner was surrounded on stage by extraordinary men has his name was called out that he made Top 3.  Making Top 3 earned Bumgarner, at a minimum $10,000, and the possibility of a brand new Kenworth tractor valued at over $100,000.

Starting October 1st through October 31st public voting opens up for Bumgarner to earn the top spot for this year’s award.  With Veriha Trucking being the smallest carrier being recognized, Bumgarner will need community support during this voting period.  Links to the voting are available on Veriha’s Facebook page and website www.driveforveriha.com

Bumgarner, Appleton, WI, joined Veriha’s Apprenticeship program in August 2018 and his introduction into trucking hasn`t been without growing pains, but it has been successful. “Wade always finds a way to make it happen and somehow still has time to help others along the way. Anyone who has been behind the wheel knows the time and energy it takes to learn the profession and Wade has made that look easy with his ability to smile through adversity and pick up the spirits of those around him,” remarked Kyle McDonald Veriha`s Apprenticeship Program Leader.

Veriha opened their Apprenticeship program in May 2018 in their recently renovated Veriha Training Center on Cleveland.  With over two years running their state certified Veriha Academy, Veriha realized that there was even more they could do.

Veriha’s Apprentice program is fast paced.  After week one of classroom and range work students are paired with trainers and are on the road learning all aspects of driving.  The program is not only certified by the state of Wisconsin but is VA approved for veterans to utilize their GI Bill.  This helps support veterans transition into a new career and utilize the funds that are available to them.

“Supporting Veterans is a significant focus for all of us personally and as a company.  Several associates throughout the organization are military veterans. These are individuals who can speak to the sacrifices that it takes to serve our country, and the importance of moving freight and keeping America moving,” Smerchek commented.

One doesn’t have to be a veteran to attend this program.  Veriha also offers students training pay starting on day one to ensure that students can make the transition into trucking.

“We were running into potential students concerned about how they could afford schooling, how they could not receive a paycheck for eight weeks and choosing to not enter into trucking.  It was critical for us to support students who were coming to Veriha and ensure they could make this transition.  As long as they fulfill their 18-month contract this is all at no cost to them,” Smerchek pronounced. “Trucking is a great career opportunity with wages that can not only support a family, but also allows them to be able to take family vacations or buy that hunting camp they’ve always wanted.”

Veriha Trucking’s Apprenticeship program is based out of Marinette, WI.  Veriha has terminals in Marinette and Neenah, WI.